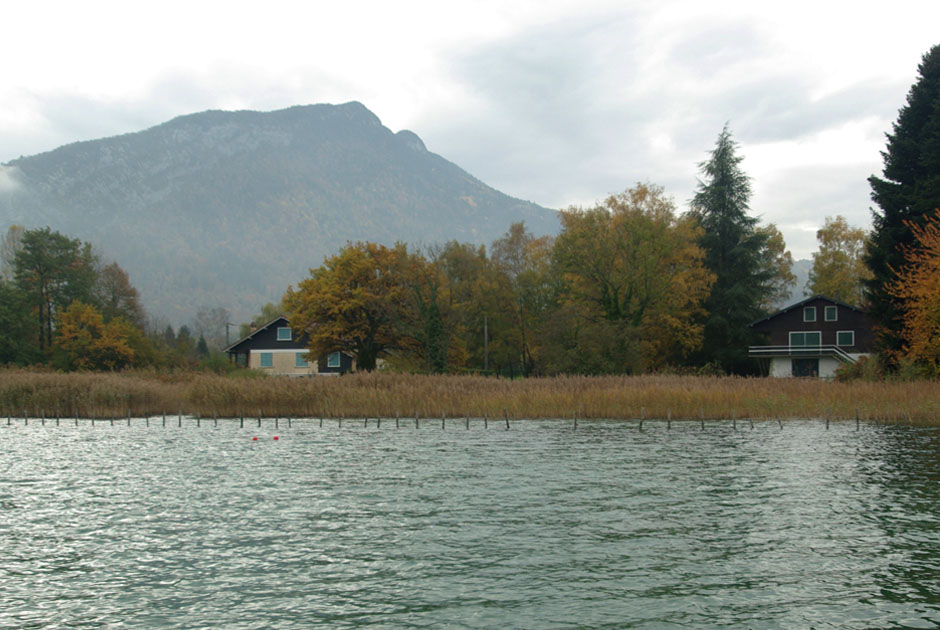 View from the shore in the direction of the site. The stakes are indicating the extent of the protected zone of the reed growth © MC - DRASSM, Yves Billaud

Short Description
The site was discovered in 1989, and partially excavated until 1994. As part of the ongoing monitoring program the site was re-inspected in 2016. It extends along about a 160m long strip in the shallow water zone. The archaeological layer is 16m at its widest, and 2m at its thickest point. During a small excavation of about 3 square meters, in 1992, the archaeological layer was only 10cm thick, but produced stone artifacts and pottery that indicated influences by the Chasséen and Cortaillod cultures. Across a 2000 square meter area, 1123 prehistoric piles were recorded topographically. The study of this map showed an area in the very north-west of the pile field with comparatively few piles that the archaeologists interpreted as two small dwellings with semicircular recesses.

Special Features & Highlights
Unfortunately, the site is only partially preserved. But there are still some anthropogenic organic layers of sediment left that give us valuable information about one of the oldest settlements in the Savoyan Lakes.

Despite its small size, the Californian River Crab is a huge problem for the prehistoric sites, because of its extensive burrowing © MC - DRASSM, Yves Billaud

Current Activities
The location of the site provides some degree of protection, because it is part of a restricted watershed area and it is partially overgrown by protected reeds. But it has to be monitored regularly, because the shallow water reacts strongly to waves and currents, especially during dry spells, when the water levers become even lower. Another serious threat are the invasive Californian River Crabs (Pacifastacus leniusculus) that burrow deep holes into the sediment.

Pile Dwellings up close
The site is not visible. Entering the site is prohibited.